THE GARDENS OF SRI LANKA 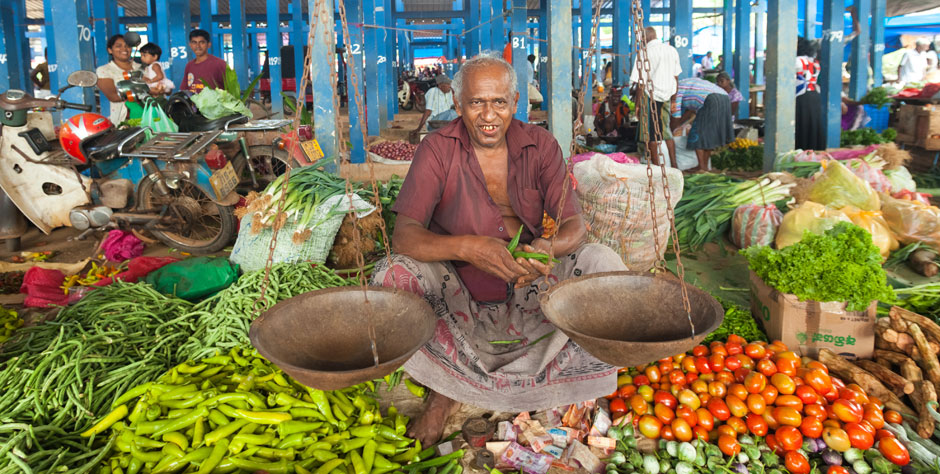 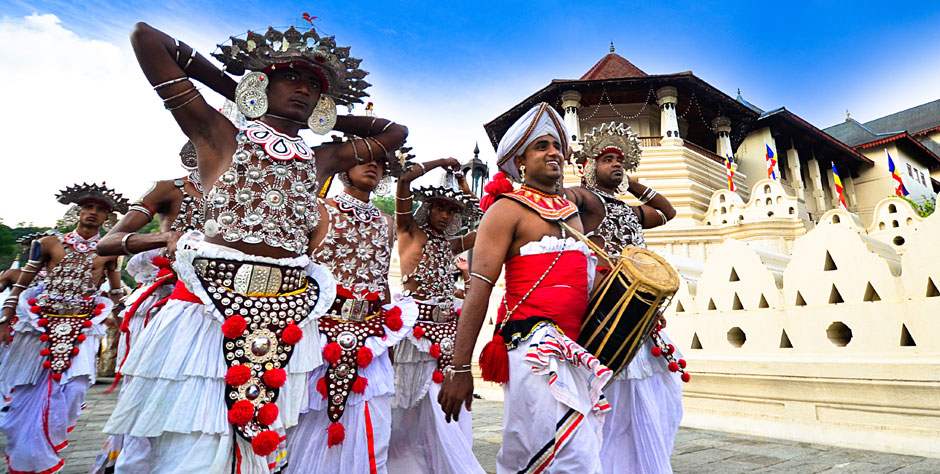 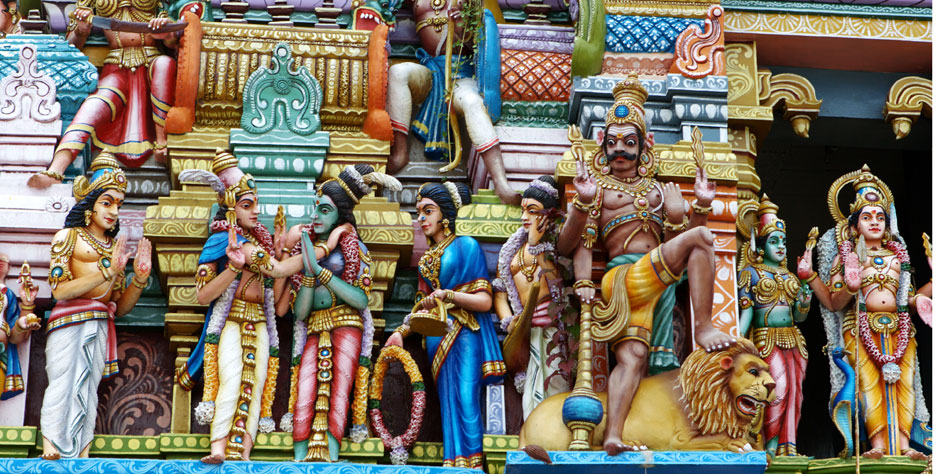 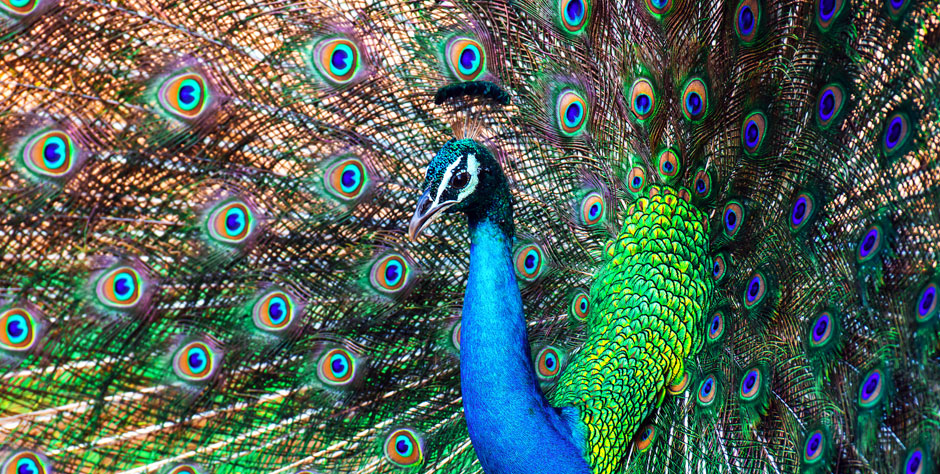 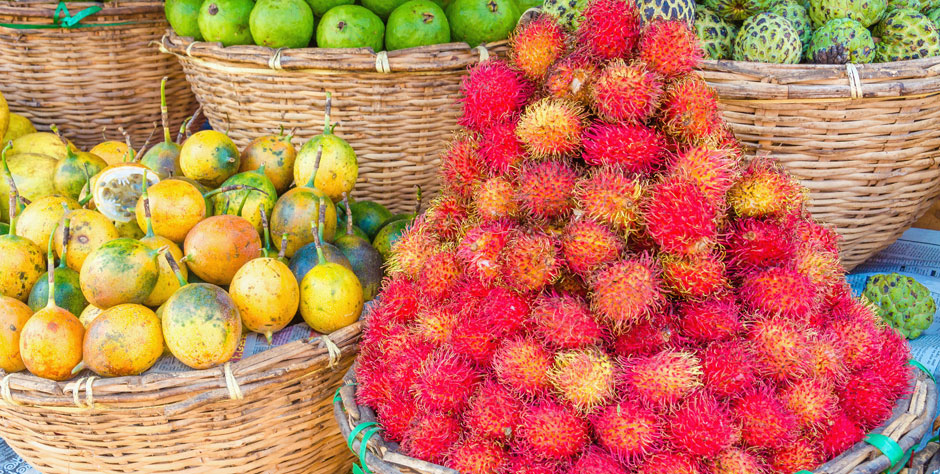 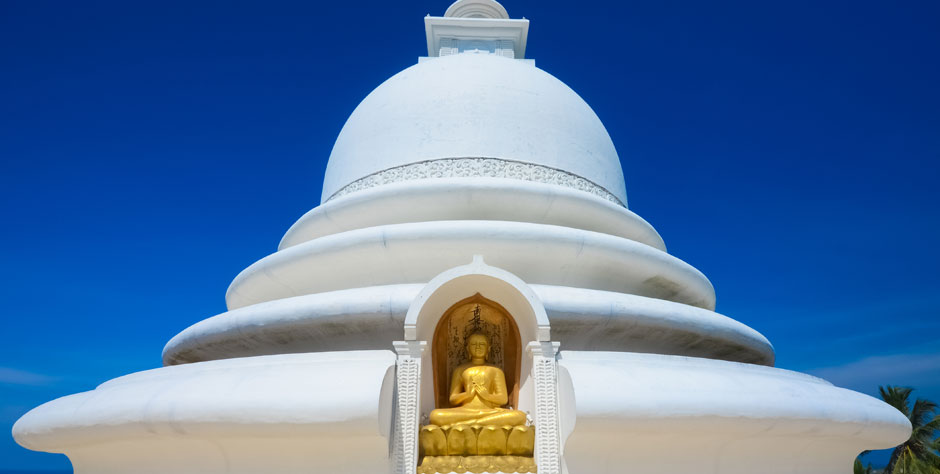 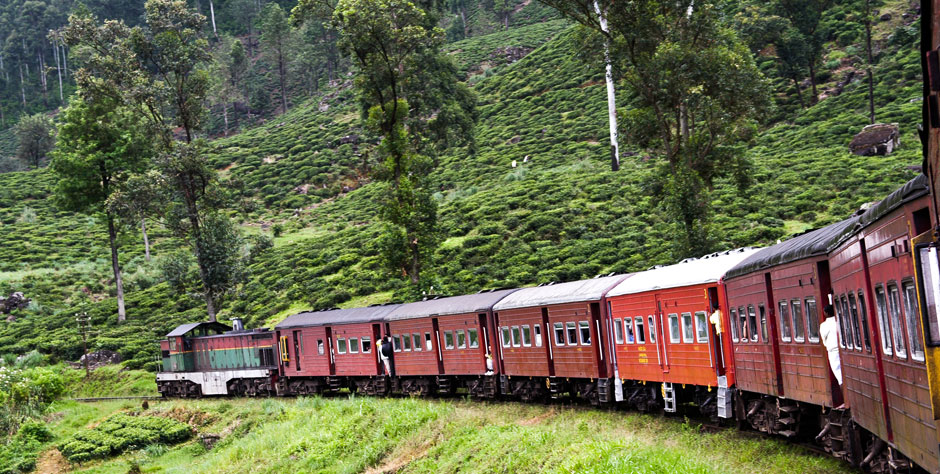 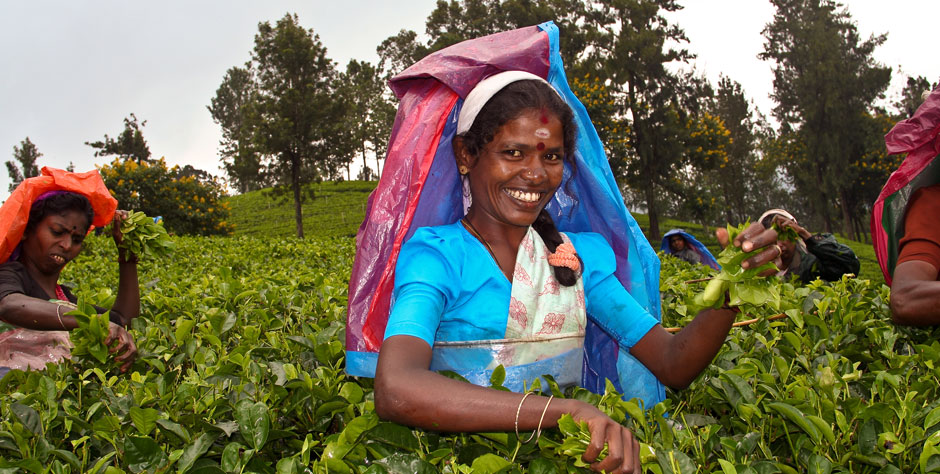 Meet your Ross Tour leader Paul Urquhart at Sydney Airport for flights to Singapore and on to Colombo. Late evening arrival into Colombo then transfer to our hotel in the resort town of Negombo, rich in culture and history.

Travel today to Sri Lanka’s cultural triangle, stretching from medieval Kandy to the ancient kingdom of Anuradhapura in the north and Polonnaruwa to the east. It’s a treasure trove of ancient monuments. First stop is the Golden Temple of Dambulla, a pilgrimage for Buddhists and Hindus for 22 centuries. The rock caves here at Dambulla date to the 1st century when King Valagambahu took refuge having been expelled from Anuradhapura. He converted these caves to a rock temple. This cave monastery is home to Buddhist monks and covered with 2,000-year-old murals depicting life and times of Buddha. There is a collection of 157 statues in various sizes including a reclining Buddha 15m long.
Check into The Heritance Hotel Kandalama, designed by Geoffrey Bawa, our accommodation for the next three nights. The hotel is set into the rock face with exterior walkways along the cliff face. Wood trellises support climbing vegetation covering external walls. These elements help to blend the building into the site, create a relationship to its surroundings and blur the distinction between the natural and man-made. The masterful siting, spatial ambiguity, and facade articulation combine to create a one-of-a-kind experience. It’s surrounded by jungle and overlooks the expanse of the Kandalama Wewa (part of Sri Lanka’s ancient irrigation system) and across to the Sigiriya Rock Fortress. Dinner is included tonight in our hotel.

Sigiriya Rock Fortress is our destination this morning; a UNESCO World Heritage Site known as the ‘Fortress in the Sky’. It is also called Lion Rock because of the huge lion that once stood guard at the entrance to the Palace on the summit. We’ll walk through Sigiriya Gardens; the Miniature Gardens, Pavilion Gardens, Fountain Gardens, Moated Palace Gardens, Octagon Pond Gardens, Boulder and Terraced Gardens. The remains of a giant pair of stone lion paws still guard the staircase that leads to the summit, once occupied by a royal palace. Afternoon visit to Popham’s Arboretum. In 1963 Sam Popham, a retired British Naval Officer, bought 7 acres of waste land, once tea plantation, and planted a forest to conserve the unique biodiversity of this dry zone of Sri Lanka. in 1989 he gifted his arboretum to the Institute of Fundamental Studies in Kandy to be used for conservation, research and education. A further 27 acres were acquired that same year. The remainder of the afternoon is free to enjoy the facilities at Heritance Hotel.

Visit the ancient city of Polonnaruwa, an ancient Royal capital, once a thriving commercial and religious centre (800 years ago). The glories of that time are on display, well preserved 12th-century ruins that recall an inspired past. These ruins give us an idea of how the city looked with tombs, temples, statues and stupas in an archaeological park. Late afternoon safari in Minneriya National Park to see wild elephants. This forest and wetland provide shelter for toque macaques, sambar deer, buffalo, crocodiles and leopards. Return to our Hotel Kandalama with dinner included.

We are travelling to Kandy, the Buddhist capital of the last Sinhalese Kingdom. It’s 500m above sea level and surrounded by hills. But first, we’ll stop in Matale a small town in the ‘Hill Country’ famous for its spice gardens. We’ll see how spices are grown and processed and learn how herbs and spices are used in Ayurvedic medicine practices. Lunch included in the garden. Next stop is the Temple of the Tooth in Kandy, a sacred Buddhist site known as the city of Senkadagalapura. It was the last capital of the Sinhala kings whose patronage enabled the Dinahala culture to flourish here for more than 2,500 years until the occupation of Sri Lanka by the British in 1815. The Temple houses one of Buddhism’s most sacred relics and attracts pilgrims from all over the world. The Royal Complex situated around the Temple and the lake include the Kings Palace, Queens Palace, Audience Hall, Boathouse and Royal Summer House; representing a zenith of ancient Sri Lankan architecture. Check in at our hotel Cinnamon Citadel overlooking the Mahaweli River.

First stop this morning is the Royal Botanical Gardens of Peradeniya in Kandy, originally the ‘Royal’ pleasure garden, is encircled by the Mahaweli River. Bandara Palipana, Professor of Botany who has worked in the garden for 25 years, will take us for a walk (subject to his availability). It’s famous for its precious living collections of endemic, indigenous and exotic plants; all up 4000 species of plants gathered over the last centuries. There’s a renowned collection of orchids.
A tour of Kandy this afternoon in its lakeside setting including the Central Market.

It’s a short drive to Peradeniya where we will board our air-conditioned train for a spectacular scenic journey through hill country and tea plantations to Nuwara Eliya.
We’ll be greeted at Nanu Oya station and driven the short distance to Nuwara Eliya to spend a relaxing afternoon in the hills. Lunch today in the Nuwara Eliya Gold Club, the oldest in Sri Lanka, built in ‘colonial’ style 1889 amidst tea plantations by a Scottish soldier for the British servicemen. We will see how its abundant rainfall, sunshine, cold nights and misty mornings, offers the perfect climate for producing high-quality teas when we visit one of the oldest tea plantations this afternoon. Sri Lanka is one of the world’s largest exporters of tea. Since its introduction in the mid-19th century, Nuwara Eliya has been the capital of the tea industry. Rolling mountains are carpeted by green tea plantations. It’s a slice of England here in the hills with brick and stone houses, rose gardens and manicured lawns. Nuwara Eliya in many ways resembles a small English village. We’ll see good examples of British Colonial architecture then check into St. Andrew’s Hotel, a former Colonial Country House, reminiscent of the days of the British Raj.

A morning visit to temperate hill-country Hakgala Botanical Garden with lotus and water lilies, rose garden, fernery, perennial border, orchid house and arboretum. This garden experimented with cinchona whose bark yields quinine, widely used to treat malaria. Hakgala Nature Reserve is home to a variety of wildlife, including bears, monkeys and birds.
Enjoy High Tea at the Grand Hotel that was built in 1828 as a holiday residence for Sir Edward Barnes, the fifth Governor of Ceylon, in the style of an Elizabethan-era manor house.

We are on the road to Galle, the former Dutch Colonial town located on the southwestern coast of Sri Lanka. We’ll stop at Mlesna Tea Castle (schedule permitting) and lunch near Kitulgala where the movie “Bridge on The River Kwai” was filmed on the Kelani River.
Check into the minimalistic, elegant Lighthouse Hotel, another hotel designed by Geoffrey Bawa, and an excellent example of his skill in linking Sri Lanka’s ancient architecture with modernism. Hotel terraces sweep down to a small sandy bay with unrestrained views of the Indian Ocean. Dinner is included tonight.

We will learn about cinnamon at Villa Mayurana cinnamon plantation. On top of Cinnamon Hill, it offers wonderful views of the south coast and Lake Koggala. Cinnamon was discovered in Sri Lanka by the Portuguese. They identified the wild tree, researched its benefits and designed methods to cultivate and harvest the cinnamon bark. Now Sri Lanka produces 90% of the world’s cinnamon. We will see cinnamon being harvested. Late afternoon city tour of Galle Fort, first built in 1588 by the Portuguese then fortified by the Dutch during the 17th century. UNESCO has recognised its heritage value and its unique cultural significance: “an urban ensemble which illustrates the interaction of European architecture and South Asian traditions from the 16th to the 19th centuries”. The fort remains a hive of activity and is one of the few World Heritage-listed sites in which a bustling population continues to thrive. Option to stay in the fort for drinks and dinner or return to our hotel.

We’ll understand the life and times of Geoffrey Bawa today with our visit to his country home, Lunuganga Estate. Built in 1947 in an abandoned rubber estate, it was this project that changed his career from law to architecture. He experimented with structures and spaces and made changes all through his life, until his death in 1998. Lunuganga is a work of art, Geoffrey’s genius to create a landscape so naturalistic that it could hardly be identified as man-made. Lunuganga is Bawa’s consummate legacy. Return to Galle with the rest of the day free to explore.
Accommodation: Jetwing Lighthouse, Galle

We are travelling to Colombo today with a visit to Bevis Bawa’s Brief Garden. Bevis was Geoffrey’s brother, also an architect and artist. He designed and converted what was a rubber plantation in 1929 into the remarkable garden it is today. It’s a private estate, introspective, surrounded by a thick hedge of bamboo and filled with sculptures by Bevis himself and his many artist friends. The house is beautiful, with a simple Bawa aesthetic and filled with artworks. Continue to Colombo and check in to ‘Grande Dame’, the Galle Face Hotel Colombo. Built in 1864 on the seafront, it faces Galle Face Green and reflects the grandeur of the British Colonial period.

Geoffrey Bawa’s Colombo townhouse is very different from his country estate. It’s an introspective assemblage of courtyards, verandas and loggias. Bawa combined four tiny bungalows adding a white entry tower that peers like a periscope across nearby rooftops towards the distant ocean. We will explore this haven of peace, an infinite garden of the mind, locked away within a busy and increasingly hostile city. Free time this afternoon for last minute shopping and then we will meet up for our farewell dinner at the hotel. A late check-out has been arranged, ready for our transfer to Colombo Airport.

To secure your booking and make your deposit, please complete our online booking form. You will be contacted by a Ross Tours Travel Manager to confirm your details and preferred method of payment. 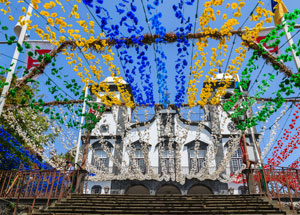 Portugal and the Madeira Flower Festival 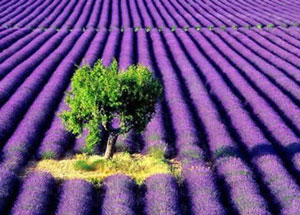 Lunch in the shade of an enormous spreading English oak, enveloped in the fragrance of arching rows of lavender in full bloom. Join us for aromatherapy of the
botanical kind. We’ve included some beautiful cool climate gardens to give you an inspirational short break. 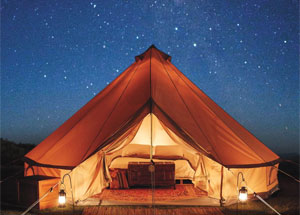 Hospitality at a whole new level with this unique opportunity to stay at Australia’s biggest and most beautiful garden with free reign to explore the private garden in
full spring flower. 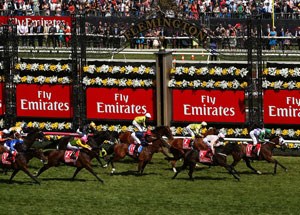 Go ‘behind the scenes’ at The Race That Stops The NationTM. See the Flemington Racecourse Rose Garden before the race, when the roses are looking their best. Visit Heide
Museum of Modern Art and gardens, Werribee Mansion and the Victoria State Rose Garden. 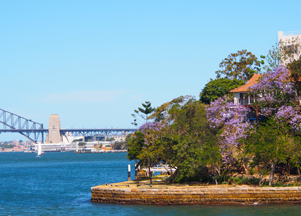 See the most beautiful harbour in the world with breathtaking Jacarandas in full flower. Hear the stories about Sydney’s
early days on the waterfront from Graham Ross. Graham’s passion for Sydney Harbour has seen him escort over 60 Jacaranda cruises since 1988.

Autumn in Japan with Graham Ross

Graham Ross will tell you autumn is his favourite season with richly coloured gardens and landscapes. He’ll take you to ‘Master’ gardens to appreciate exquisite design.
Share ancient traditions on this journey; it’s more than a holiday, it’s the total Japanese experience. Explore South Australia and the coastal wilderness of Kangaroo Island. Gardens at their peak, roses mingled with iris and other favourites in the Barossa Valley
and Adelaide Hills. Natural wonders of Admirals Arch and the Remarkables at Flinders Chase National Park.